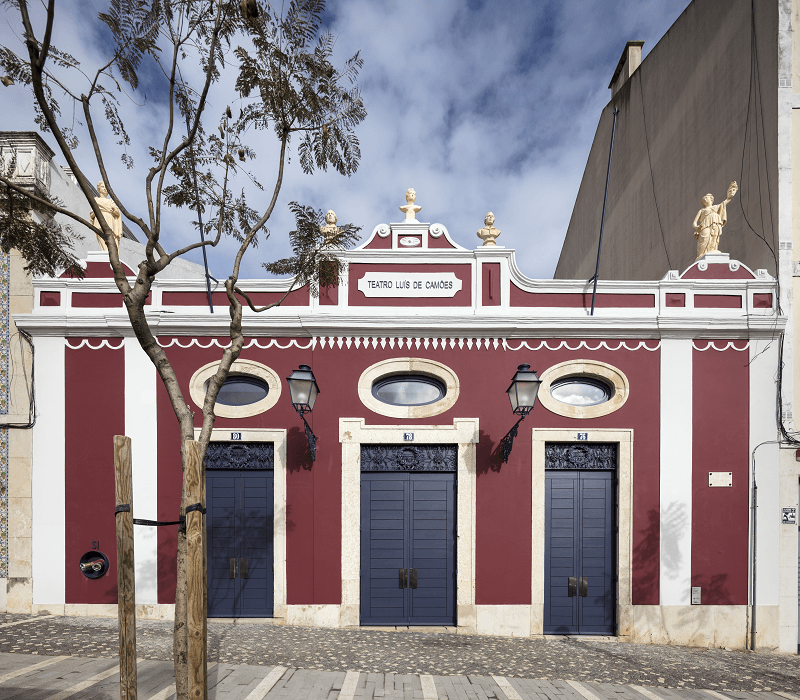 «In its relative simplicity of a neighbourhood venue, the Teatro Luís de Camões opens its main elevation, a modest one-floor neoclassicist composition, onto the Calçada da Ajuda, nrs. 76 to 80, right in middle of the block, halfway between Travessa das Zebras and Travessa do Comendador. The small elevation encompasses three doorways headed by oval occuli, embellished by stonework, framed by masonry pilasters, finished by cornice and verge where acroterium statues in non-glazed earthenware: two full-bodied figures on the sides, perhaps Tragedy and Comedy, and three head figures in the center.

The building takes on a rectangular lot of about 13-meter-wide by 36 meters depth, and contains just one theatre room, preceded by a tiny atrium. It is an Italian style theatre hall, with a seated audience and lateral seats, slightly higher, bordered by a wood frame that supports the U-shaped upper floor, where the boxes and the tribune are placed. Casted iron handrails with embedded elements protect both the boxes and the lateral edges.

The painted ceiling displays, at the centre, in a floating robe and holding a mask, a representation of the muse Talia, sided by two symmetrical compositions of laureated arrays of musical instruments (flute, lire…) that symbolically suggest the other muses of the performing arts.

We further know that the “stage curtain for the teatro Luiz de Camões which was indeed a good deal of trouble” was painted by Columbano (1), but this original curtain has been lost.

As it is yet to be proven that the Teatro Luís de Camões was actually built on top of the remaining structure of the Royal Quinta de Belém Opera House, commissioned by King D. João V between 1735 and 1737(2), we limit this text to the objective information we possess at the moment. If it was indeed the case, its transformation was radical, because no architectural or decorative element refers to the eighteenth century, and the stonework used in the spans of the façade if of a yellowish limestone explored only in the second half of the century.

The theater was built on the initiative of João da Cunha Açúcar, who owned a drugstore on Rua Junqueira. According to the press of the time, the theater had its opening party on June 8, 1880, with the unveiling of a statue of the poet Luís de Camões, followed by “a feast to 55 paupers”. On the 10th, at 8:30 p.m., “opened the first show with the performance of Casimiro d’Abreu, Camões and Jau and the comedies Countess de Marsay and sogra e contra sogra” (3), by the Soares Company (4). These initiatives were part of the celebrations of the third centenary of the Poet’s death, on June 10, 1580, a date evoked in the banners of the side doors.

In 1892 he passed on the estate to Joaquim Maria Nunes, who had a wood business on the same street (5), whose wrought iron initials form the monogram wrapped in a cast iron crown, inscribed on the banner over the nr 78 door.

Without much success, the theater would be closed for a few years, until Belém-Club, a recreational society created on March 2, 1899, leased the building a contract signed on January 6, 1911, to install there its headquarters. The tenant asks for the owner’s permission, in a letter dated March 18, 1924, to make large renovation works, “of the roofs over of the part occupied by the dressing rooms, consisting of reconstruction of the decaying parts, replacement of the wooden partitions of the rooms and a more appropriate room distribution. The works began with the demolition of the roof and back walls of the building,” but in 1929 these had not yet been completed because since 1927 the owner had been successively called forth, by the competent municipal services, to carry out the necessary conservation works. The building was then owned by Amélia Peyssoneau Nunes, Joaquim Maria Nunes’s widow, who allegedly could not start the conservation before her tenant could finish rebuilding the back wall and roof. The management of the Belém-Club eventually asked for permission to proceed with the renovation works that, in addition to the roof, “in a deplorable state, included fixing the support of the façade, which was on the verge of collapsing” (6).

It will be as a result of this intervention that the theatre’s new pictorial decoration appears, with geometric motifs in art deco, dated to about 1930, in pastel shades of gray, silver and ocher-yellow, which, painted on canvas, covered the ceiling and decorated the narrow strips under the boxes, to match the wider strips on the walls, in blue zigzag and triangles.

At least one of the shows in the television series Melodias de Sempre (1960-1969), hosted by Jorge Alves, was shot at Belém Clube, and included images of the carriages arriving from down the street, showing the attendees in the time’s attire (7).

The seats were removable, so the room could be turned into a ballroom. As a curiosity, on the middle floor, just across the bar, there was an illegal gambling room (8).

The building passed to the Lisbon City Council in 1967, through an exchange for a municipal land on Av. United States of America and was owned at the time by Justino Soares Gonçalves. The municipality kept the lease to Belém Club until 2015, although the space had been closed to the public for safety reasons by the General Inspection of Cultural Activities three years earlier, and the community club was transferred to its new facilities on Junqueira Street.

Following a call for proposals launched by Lisboa Ocidental SRU – Sociedade de Reabilitação Urbana, E. E. M, in 2015, the project for renovation, requalification and adaptation to contemporary uses (9) was given to Contemporânea, Ld.ª (Architects Manuel Graça Dias and Egas José Vieira). Given the building’s general state of disrepair, it has undergone a deep intervention, especially on the stage box and service areas, but eventually the theater was able to recover some of the splendor of its nineteenth-century character.

The renovated Luís de Camões Theater reopened on June 1, 2018 with the name of LU.CA and a programme oriented toward children and young audiences.»

António Miranda holds a degree in History from the Faculty of Letters, University of Lisbon, and holds a Specialization Course in Documentary Sciences from the same institution. He has been working at the Lisbon City Council since 1991, where he has held positions in Heritage and Patrimony, working with the local offices of Bairro Alto, Bica and Madragoa, where he developed research on the city’s History and iconography, particularly the tiles. He was also general coordinator of the Lisbon Museum. He has collaborated as a consultant on several projects and is also the author of several publications on the History of Lisbon.

(1) In a letter from Columbano to Henrique Lopes de Mendonça, 6/2/1881 – Biblioteca Nacional, estate of Lopes de Mendonça Family – quoted by Margarida Elias in http://restosdecoleccao.blogspot.com/2016/11/teatro-luis-de-camoes.html, comment. The admiration Columbano had for Camões, present in most of his historical paintins, may explain why he agreed to paint the stage curtain for Teatro Luís de Camões.

(2) «Today it is possible to state for sure that it is indeed the former Royal Theater of Belém, built in 1737 at the behest of D. João V and reformed in 1754/1756 by D. José I, under the direction of Giovanni Carlo Bibiena. However, the existing documentation does not make it possible to determine the amount of this intervention from Bibiena». In the email of Professor Paulo Roberto Masseran (Doctor and Architect) to SRU Ocidental, sent on October 28, 2016.

(3) Newsclipping in http://restosdecoleccao.blogspot.com/2016/11/teatro-luis-de-camoes.html accessed on August 31, 2018. A Blog by José Leite